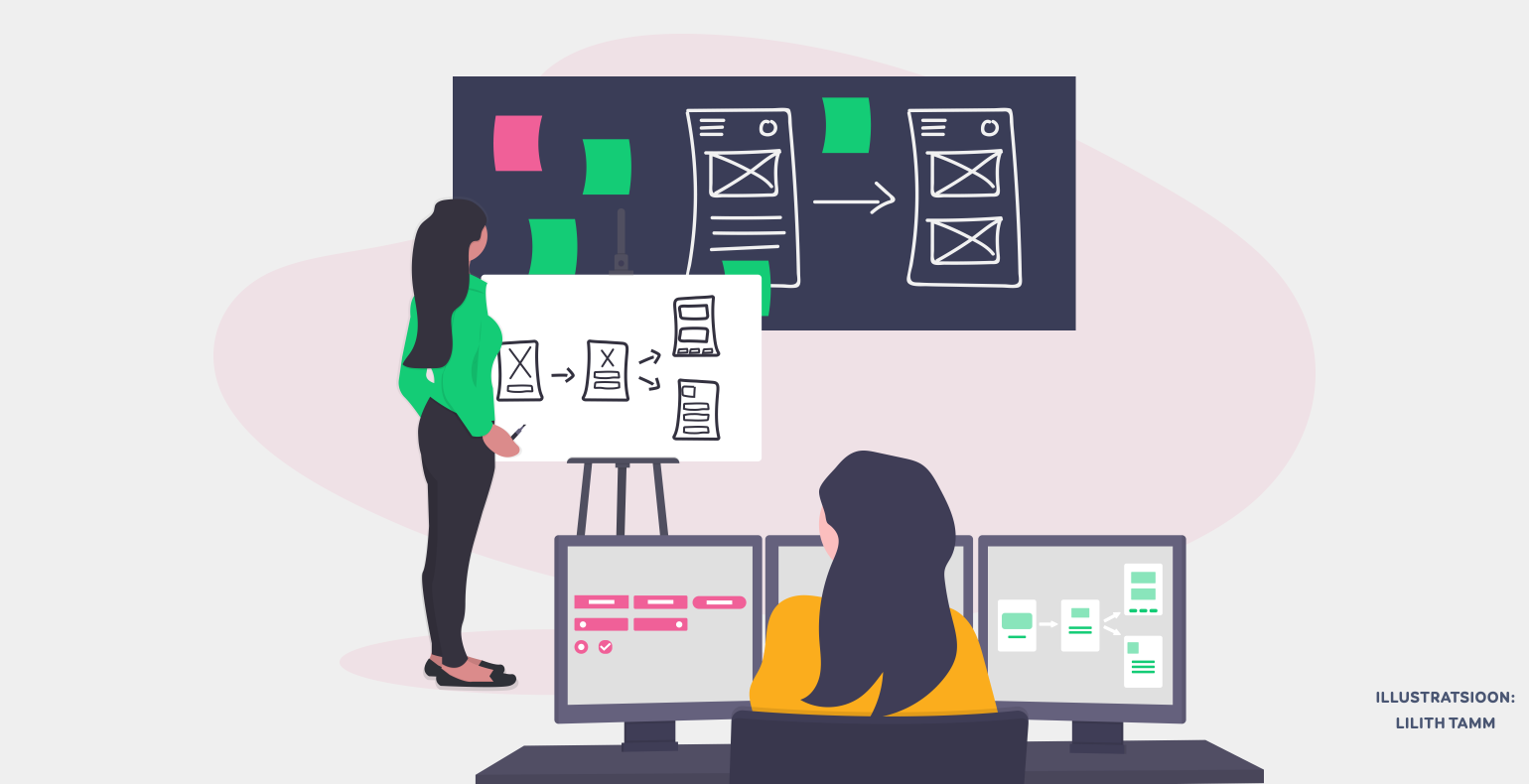 Various myths surround UX and UI design and oftentimes, it can be difficult to understand which designer is needed for a specific project when placing an order for a design job. With input from Hegle Sarapuu-Johanson, Head of Service Design at Trinidad Wiseman, this article will help clarify when you should decide for UX, when for UI, and when both of those fields should be covered by one person.

UX, UI and the myths around them

With UX designers, we are talking about user experience designers, and with UI designers, user interface designers. UX and UI are quite closely related, but both designers have their own specific goals, completely different tasks and their outcomes are presented in different formats.

We have noticed that there are two most prevalent misbeliefs or myths that people see as reasons for hiring both of these roles in one person:

However, in the worst case, bad UX will become apparent after production and often, no one knows to ask or expect to see the outcome of a UX designer’s work. When there are on expected outcomes, then there are no activities for it either.

And if we have no clear activities, then in turn, we do not know how to describe a UX designer’s tasks, and in situations like this, it seems a lot easier to simply hire a 2-in-1 solution for UX/UI.

But let us have a look at the process for a large software project. Before starting production on the software or the user interface, the services, the user’s work process, and the functionalities are all mapped out. This is important to ensure that the most efficient and motivating way of achieving the everyday goals of the users is identified.

This is the UX designer’s field of work and it is often conducted in cooperation with business analysts. The UX designer’s task is a conceptual one: analysing the work processes and the work environment, obtaining a detailed understanding of the needs of the user as well as any limitations, and documenting all of the information gathered in a format that can be used by others in the future. Afterwards, the concept for the new solution will be created based on this knowledge.

Where does UX design end and UI design begin? 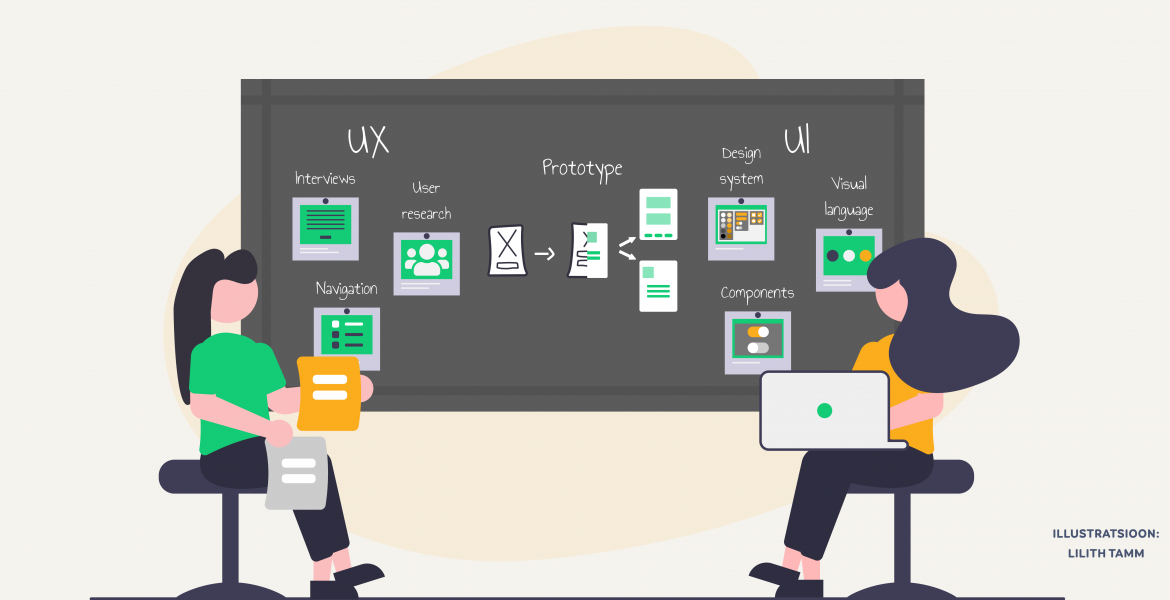 UX designer and UI designer are sharing tasks. Prototyping is their common task.

The UX designer conducts internal interviews, surveys, and talks to the end users who will be using the new software every day to gather information and to gain an understanding of the project’s business goals and other goals. In other words, the as-is situation is mapped out and a new approach for the future is described.

As a result of the work done by the UX designer, a strategy for melding the new software with the existing environment is created in such a way that the real-world and digital change could both be achieved as painlessly as possible.

During all this, the changes for both the company and the users are determined and a transition journey is mapped out. Another thing that is evaluated is whether working with the software, the order of the activities within it, and the buttons and other details all make sense to the user.

The UX process culminates in a prototype that makes it very clear how the user will be working in the future. Prototypes are the ideal tool for creating a fairly detailed understanding of the end result. Usually, many important details are agreed upon during the prototyping process. A prototype must be changed for as long as it takes to make the work process as optimal as possible.

"Prototypes are tested on users to check how logical they are and with the help of the users, all of the places that cause the most uncertainty are identified. Changing a prototype is always much more affordable than making changes to a fully designed user interface."

Prototyping should remain in the domain of the UX designer as it is more efficient and affordable from a communications point of view. Although prototypes do include user interface elements, then this phase does not require a UI designer just yet, except in cases where the solution is meant for marketing purposes, is very visual or very interactive.

Once the UX design is done and the production phase begins, the UI designer enters the project.

The prototype’s level of detail and the moment it will be handed over to the UI designer can be decided on based on the experience and the strength of focus of the UX designer. In other words, if the UX designer is very good at creating digital solutions, then the prototype can be a high-fidelity one (with interactions).

At the same time, if the UX designer has less experience with digital environments and is more focused on the business side of things and user behaviour, then the handover can already be done when the prototype is still at a low-fidelity level.

In the case of large projects, agile development methods are used where at the end of each cycle, a specific part of the new software is completed. It is the job of the UI designer to design the actual user interface in parts – per the concept –, all of which combined will create a visual whole.

The designer is constantly creating new components ahead for the development team and is responsible for ensuring that the components are recognisable, familiar, accessible etc. 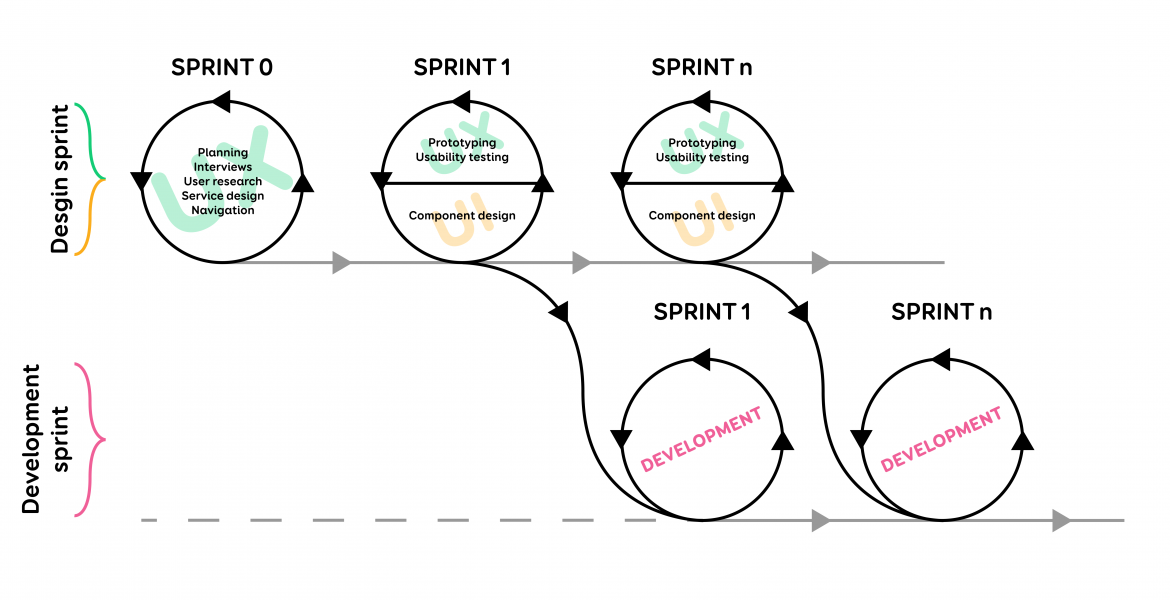 A good UI designer knows how people notice components – while UX provides the designer with the order that the user is supposed to notice everything in. A good UI designer must work efficiently, understand the psychology of design, have a good eye, and be skilled in creating compositions.

When is it not recommended to have the UX and UI designer in one person?

Let us imagine that a very capable UI designer, who is very good at creating components, is involved in the project. The designer dives straight into the UI – creating visual buttons and other details, but no longer being able to see the whole picture from that level of detail. And getting back to the big picture requires serious effort from the designer.

In other words, if you reach such a detailed level in your mind, then you can no longer see things from a general point of view. In turn, that results in inconveniences for the user in the navigation, the work process, or the usage logic behind the software.

The UX designer must be able to see the big picture and understand at any given time the task that is trying to be fulfilled, the minimum number of components required in the user interface for each task, what the likely scenarios to happen are, how the user understands what they have to do etc.

There is no room here for the mass production of visual elements. The UX designer is only able to do their job well if they can focus on understanding the user, the tasks the user must complete, the user’s behaviour, and any factors that affect that behaviour.

In a large project, the UX design is followed by the UI design – for example, it is important to first understand why a particular button is needed and once that has been determined, we can start to design it visually on a more detailed level. A single piece of software includes a lot of different functionalities that are usually divided into groups of sub-functionalities.

User research does not need to be done for all of the functionalities of the software at once, but instead, you can take a thematic approach by researching a selected group of functionalities.

Each functionality will undergo a separate process for UX design as well as UI design: UX will evaluate how each part belongs to the bigger picture, and UI will produce a number of components ahead of time for each sprint.

Now let us imagine that we assign both of these roles to one designer – figuratively speaking, the designer must conduct interviews and understand the users and the big picture with one hand and continuously produce new components (design buttons, pick out colours, create compositions) for the developers with the other hand.

The human brain is incapable of focusing on multiple subjects at the same time – inevitably, something will end up being left aside and so, the designer quickly becomes the bottleneck of the project. It is very likely that the designer will first work on more time-critical tasks – creating components for the developers while completely forgetting about the user.

To put it in another way, everyone will focus on saving the UI as a result of which the UX will suffer at some point. But if we only work on UX, then things will never even reach UI.

In a large enough project, it is likely but also human that in such a situation, mistakes will occur (e.g., fields will have the wrong date format, buttons will have slightly different designs etc), UI components are produced more slowly, the user is forgotten about altogether, important deadlines are pushed back, and the project drags on simply because the designer is physically unable to keep up.

When does it make sense to combine the roles of the UX and UI designer?

If a project is smaller and more linear (e.g., the creation of an app), then it is possible to use a 2-in-1 solution for the UX and UI designer. In cases like this, the designer is able to focus on one role at one time and the other role at another time, and the result is much more efficient since the same person already knows and remembers the results of the UX interviews and any other research that is conducted and can simply carry that knowledge over to the UI.

This means that one step in communication is left out of the process and less work hours are used up overall. But the process needs to be linear in time. So, in the case of 3-6-month projects where there are not a lot of functionalities and only a couple of developers and one designer is involved, it would be reasonable to consider hiring a UX/UI designer in one person.

But if you do so, you must take into consideration the fact that exchanging the designer is a lot more difficult. Although you can see the results of the designer’s work, the important detailed information covering it all will be undocumented since, most of the time, it is unnecessary for a short project with a small team.

To avoid any risks involved, you should remember that larger projects that take a lot more time and, accordingly, where the outcomes of the designer’s work must “live on” longer, also require detailed documentation.

Just in case, it is not recommended to hire a UX and UI designer in one person. To make an informed decision, the essence of the project and the designer’s workload need to be first evaluated.

If the workload dictates that multiple people are needed – e.g., if the UI needs to be created so quickly that just the production process alone requires two designers, then UX and UI should be kept separate.

Generally, most projects do not require two UX designers nor two UI designers – instead, you should opt for one UX and one UI designer and have them work together as a team. The results will be much better than using two of the same type of designer.

In conclusion, we recommend keeping UX and UI designers separate for large projects that include a lot of functionalities all at once and hiring the UX and UI designer in one person for projects that are small enough that the outcomes of the designer’s work do not have to “live on” for long and where the communications costs would otherwise be unreasonable.