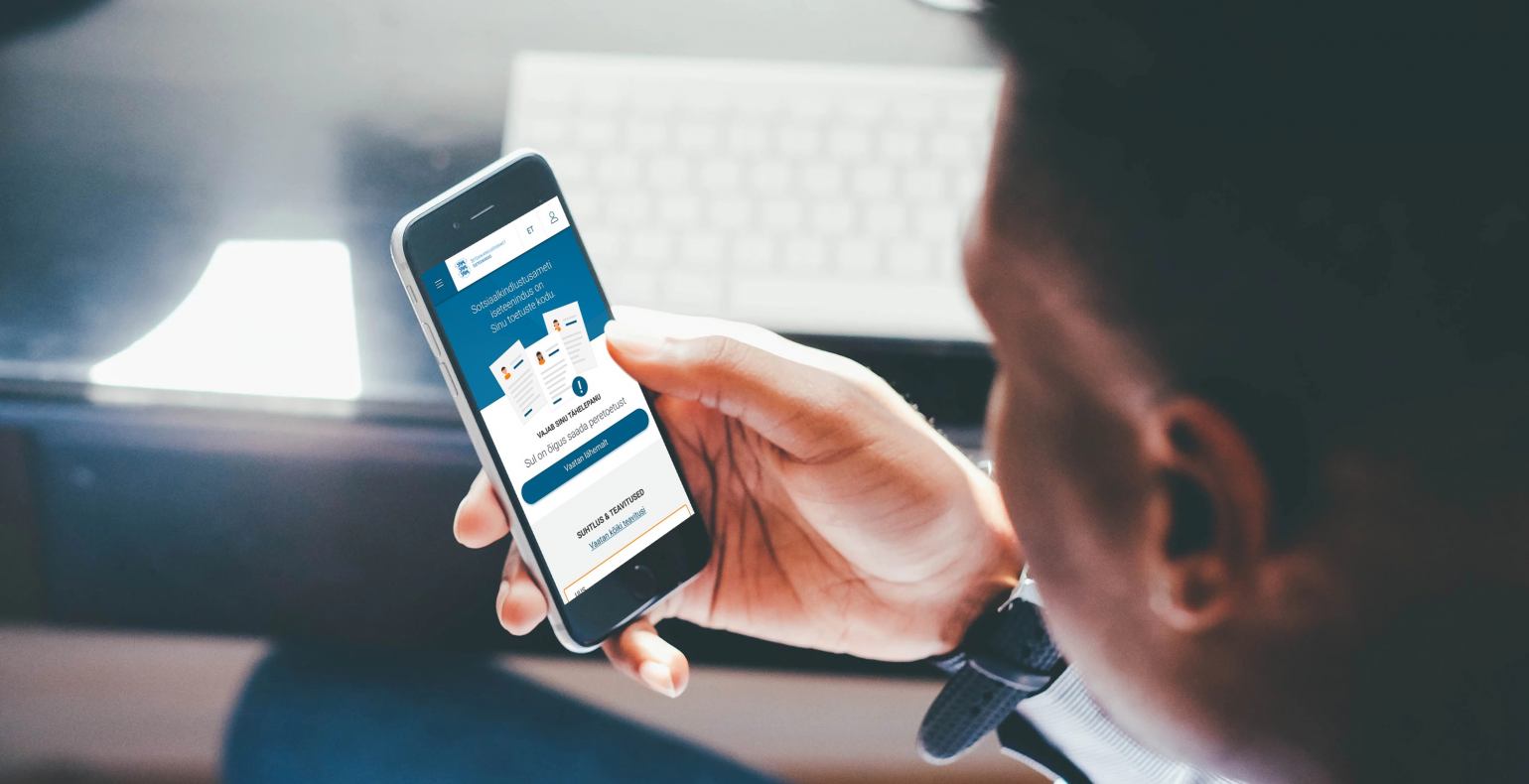 How to create proactive and user-friendly public services?

In October, Estonian Social Insurance Board opened its online service or internet-based self-service bureau where people can administer their services and benefits. Initially, people have been given the opportunity to use an application-free family allowance service (receiving childbirth allowance, parental benefits and child allowance). This information system is special for its proactive services. The Social Insurance Board’s online service portal is perfected and completed in stages.

We asked our specialists:

what are proactive services and what does the creation of a user-friendly design entail?

WHY DO WE EVEN NEED TO REORGANISE THE SERVICES OF RECEIVING SOCIAL BENEFITS AND ALLOWANCES?

There are several reasons for that. At the moment, the services that logically go together are fragmented into a number of services that are offered only after an application is filed.

When it comes to childbirth, the focus and attention should be on the child and a completely new life situation, not managing complicated state affairs. This is why things concerning the state should be as simple and comfortable as possible. A growing number of people are used to and want to do this type of tasks either on their home computer, or even more—on their mobile phone. For this reason, we needed a solution that would adapt to mobile needs and the user could move from the email sent by the state straight to the app.

In addition to the comfortable accessibility of the service, we had to think of people’s awareness. With family allowances, a parent had to know what and when to apply for. The parent had to do the searching for the information, clearly understand it, and act accordingly. In a number of occasions, this led to applications sent at the last moment, and sometimes even people being left without the benefits and services prescribed to them.

Before a proactive family benefits service was developed the new parent had to find information in a number of sources and those were at times contradictory with reality. Before developing the service, we conducted interviews which revealed that many people get information either from friends or family forums, which might be confusing or outdated. Among those interviewed were people who said that they received Word documents with to-do lists through a social media group, which might not always be up-to-date or correct either.

The efficient functioning of the state is no less important. Every move made by an official has a monetary value in reality, and the more people can do in self-service, the more optimal it is to the state’s use of funds.

WHAT IS A PROACTIVE SERVICE?

A proactive service means that when a person is eligible for a benefit or allowance, the state will offer it themselves. The process redesign was not to change the conditions of receiving family allowance, but service accessibility. Proactivity means the service corresponds to the user’s life events. There is no need for the user to turn to the state themselves; thanks to the data in the information systems the state knows which services the user has a right to and knows to offer them to the user itself.

WHAT WERE THE USER EXPERIENCE SPECIALIST SUCCESS CRITERIA IN THIS PROJECT?

Our goal is to make the service as simple and accessible for everyone as possible. This might be daily work for us, but it can be said that in the case of this particular self-service, user inclusion and taking their needs into account has received special attention. In the end, we tested a total of three sample versions of the final solution, the last of which was also made available to the public for feedback. In addition to the application’s logic and possibilities we asked for feedback on word use, translation understandability and clarity.

We were only satisfied with the results after the users thought the process of receiving family allowance was too simple to be true. “Is this it? Is it true that we won’t need to sign anything digitally or submit additional information?” they asked. The new reality and simple government services take some accustoming to, it seems.

WHICH METHODS DID YOU USE?

We adopted a user-centric approach—the service’s final user was involved in the entire design process. We began with interviews, created personas, did navigation testing and then let the users test the designed solutions (in other words, conducted usability testing).

The interviews gave us a good overview of the soon-to-be parents’ concerns, issues and understandings. Our primary focus was on the first-time parents, since they have had the least amount of contact with the benefit system and were the least acquainted with it. The survey results show that non-Estonian speakers prefer to speak with a real employee instead of choosing self-service, since they believe the language barrier makes some things unclear and can lead to misunderstandings. As a result, we tested the new logic of the service at an early stage and did it in two languages.

We also conducted navigation tests, where a user is tasked with finding the necessary information from a menu. This simple test helps us see if we have structured the menu in a correct way, and whether things go together in a logical manner, or users would search for the information elsewhere. Sometimes, even word order can make a big difference. For example, “My services and subsidies” versus “My subsidies and services”.

We also tested which works better, “My items” or “My documents”. People found “My items”, but they clicked on it in search of other things as well. “My documents” worked just as well, but people did not get lost in there while performing other tasks.

WHAT DO YOU MEAN BY SAYING YOU TOOK ACCOUNT PEOPLE WITH SPECIAL NEEDS WHEN CREATING THE SYSTEM?

It means that, for example, the system can also be used by people with visual impairments. We have followed the directive of European Parliament and of the Council on the accessibility requirements and the standards of WCAG 2.1 AA and used a web framework that has been created especially for state information systems. We used the idea of accessibility to test the entire user path, so that people with special needs would not be held back by any shortcomings of the state-managed systems. The faults that were found have been fixed but work on improving accessibility continues in order to make the application even better for the people with special needs.

HOW WOULD YOU DESCRIBE THE COOPERATION BETWEEN THE PARTIES?

Health and Welfare Information Systems Centre (TEHIK) is an ICT competence centre in the areas of health, social protection and occupation, which has been created for this type of projects.

TEHIK and the Social Insurance Board’s team are conscious co-thinkers. It has been a pleasure to work with a client who is that well aware of user experience and design, understands the importance of using the correct methods in user experience design, as well as the principle of directly involving the users throughout the entire design process. We have been pleasantly surprised throughout the entire project by the way all parties do their best, and even if it looks like they cannot, they still look for ways to manage somehow. Nobody is simply trying to get it over and done with. People also think outside the box and look to the future. We take into account both the user’s points of view, as well as possible shortcomings that might otherwise come to light only after the system has been completed.

Cooperation with Nortal, our developer, has been going well too. There is no “me” and “you”; instead everyone is actively contributing to smooth teamwork.

As designers, it is our first time to experience this wealth of nuances. It takes a great team to gain awareness of all the nuances and take them into account already at an early stage.

The recipe for a good result also needs a pinch of passionate arguments, which is great—everyone here is working to make our lives better.

WHAT MAKES CREATING AN ONLINE SERVICE FOR THE SOCIAL INSURANCE BOARD SUCH A RESOURCE-HEAVY AND TIME-CONSUMING PROJECT?

We did not set out to simply build an information system; our goal was to change the logic of the service as a whole. Even though we have optimised receiving family allowance down to a single click, the development of an event-based service is more complex and substantial than it seems. With this system, the user still sees only the tip of the iceberg. Making the service simple for the user has been a long and complicated process. In the creation of the user interface, in addition to the users’ needs, we had to take into account the various already existing systems, which are all interconnected, have different limitations and levels of technical complexity.

WHAT ARE YOUR NEXT STEPS AND FURTHER DEVELOPMENTS OF THE SYSTEM?

When developing a solution, it is important to think of the service path and general communication. People must know when to expect an offer. In the past, parents could apply for family allowance as soon as the child was born. Now the child must first be named, after which the state sends the allowance offer via email.

In a few months we should be able to see how self-service begins to work by looking at user statistics. We must continue to monitor the way final users behave in the system and what issues may still arise. Thanks to comprehensive preliminary work we may be certain that we have not made any significant mistakes.

The current system is made for everyone, however, it does not take into account special needs, which does not mean that services pertaining to those special cases (e.g. support services and benefits for special needs children) might not become a part of it one day.

HOW ARE SUCH LARGE SYSTEMS MADE IN THE FIRST PLACE?

When it comes to large and complicated systems, one cannot have their cake and eat it too. You have to go one service at a time. The current development is an agile development process—it begins with work on small and narrow sections, which enables possible fast and flexible amendment of the service, should the need arise. In addition, the process has accounted for smooth further development of the system and addition of new services. The next ones to be added to the existing system are technical aids and pensions.